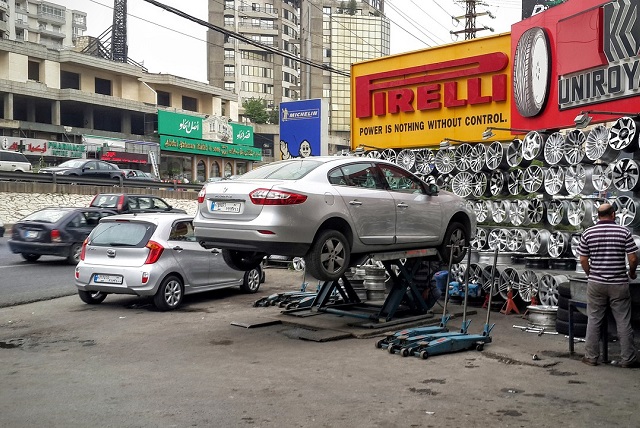 Until the beginning of 2014, Iran was a market not accessible for almost any Western market player – regardless of the industry. With sanctions imposed on Iran over the Iranian nuclear activities, almost all Western companies withdrew from the Iranian market. For many players in the automotive industry, particularly the French OEM, this led to dramatic losses in revenues.

With the sanctions being reduced and the political environment becoming more steady, Iran is again on the watch-list of many companies. The market is the largest in the area, with 70 mio. underserved consumers and a local industry which suffered strongly during the sanctions. Of course, Iranian consumers are not wealthy by Western standards: At the current exchange rate average annual income is at 5,000 USD p.a. But there certainly is a substantial segment of wealthy consumers and Iranians like (good) cars as people from other nations do.

The Iranian automotive market for passenger cars is dominated by four local players but has several other players more or less active in the manufacture of passenger cars and commercial vehicles:
1.    Iran Khodro
2.    Saipa
3.    Bahman
4.    Kerman Automotive.

Iran Khodro and Saipa have own brands while the other car makers mainly assemble cars under licence or in a partnership. Many suppliers are part of these conglomerates. With own OEMs, Iran is unique in the MENA region. Many of the top players in the automotive industry are linked to the Government or individual officials. For example, even though that Iran Khodro and Saipa are listed companies (40% share) they are still controlled by the Government. Political decisions in Iran concerning the automotive industry are always taken with a view on their own holdings.

Sale numbers are not officially tracked but in 2014 the number of new passenger cars sold will likely be close to 1 mio. This number is expected to grow heavily over the course of the next years. Sales are dominated by local models and models either based on French models or directly manufactured under French licence.

The car parc, as in many other countries, is relatively old. As imports of used cars are prohibited and due to the increased local production, the car parc will rejuvenate quickly over the course of the next years. Car penetration, however, is still very low with about 15 cars / 1,000. CNG is playing a major role in Iran and any player active needs to have a solution for this.

Casualties in Iran by traffic accidents are among the highest in the world. This is why the Iranian Government is trying to increase safety standards both of new models and cars already on the road. There are mandatory routine inspections but there is also a wide trade in faked inspection licences.

Local players have an established service network all over the country. There is no well organized independent aftermarket. Rather, Iran is characterized through many independent small repair garages. Good coverage will be a major challenge for OEM entering the Iranian market. The Institute of Standards and Industrial Research of Iran (ISIR) is responsible for ensuring the quality of the aftersales service activities (although mostly focused on original service activities). In 2012 it checked over 2,000 dealers with respect to sales and service related issues. These checks are a speciality of the Iranian market and any OEM entering Iran will be confronted with these checks. Based on the results official rankings are made and can lead to pressure on companies with bad performance.

Equal to the passenger car market the market for commercial vehicles is about the rebound. During the crisis, many smaller assemblers or OEM were forced out of business and even the larger players could only survive with official financial aid. With sanctions being lifted, the automotive industry will revive.

Both in the light and heavy truck and tractor market local brands are not the leading players. Isuzu and Scania are well positioned in the Iranian commercial vehicle segment.

The bus market was virtually none-existent in 2013 but is expected to revive strongly as there is strong demand for public and private transportation.

For foreign OEM the import of fully assembled units is no solution due to transportation costs and the Iranian tariff structure. Tariff rates for commercial vehicles over 5t currently are at 30%.

The research report Iranian Automotive Market, 2014 – 2020, covers both the passenger car and the commercial vehicle market in Iran. The report can be ordered directly at Globis Consulting.